Your Voice, Your Future – Wave 4 Results

What Students are Thinking in the Coronavirus Crisis

Your Voice, Your Future is intended to provide insights into the experiences and concerns of current and incoming post-secondary students as they look forward to continuing their studies in this pandemic.

Wave 4 of the Your Voice, Your Future survey by CRi and the SchoolFinder Group generated 10,998 complete and valid responses from August 5 to 17th. Over 4,100 Canadian and international students took part in Wave 1 (April 27 to May 3) while Wave 2 (May 15 – 23) and Wave 3 (May 30 to June 8) drew almost 13,200 completed surveys between them. Altogether between the four survey Waves to date, 29,300 students have participated in the research.

» 76% of respondents are female and 21% male; the remainder preferred not to say.

» The proportion of current students who say they won’t return if all courses are online is down to 8% from 14% in Wave 3, way below the 23% results in Wave 1. This includes 10% of college respondents and 7% of those in university.

And most students appear to be committed

» Now 85% of students say they will adapt to whatever way classes are delivered this fall – way up from 61% in Wave 3.

» 75% of students who might ask for deferral say they would attend if their deferral was denied.

» 67% of those who say they will look for a job in services or retail also say they would attend if they can’t find one, up from 57% in Wave 3.

Given that 93% of respondents say they are definitely attending school this fall, there is clearly some overlap with the 21% who say a gap year makes sense. As far as we can surmise, many students will start the fall but a good portion of them appear to be reserving the option of taking a gap year and returning later. It might take some persuading to keep them learning online.

» Money, money, money! 73% of respondents say they will need a job to have enough money to go to school in the fall even with government grants, unchanged from Waves 1, 2 and 3. The surveys have been running for almost four months and students’ financial situations have not improved.

» Students are unhappy about tuition: only 9% agree that tuition fees should be the same for online and in-person courses. An overwhelming 82% disagree, which is in line with results from Waves 2 and 3.

On the communications front: what is going on?

» It’s bad: overall satisfaction with communications received in the June-July time period was a sad 32%, way down from the 52% result in Wave 3, 58% in Wave 2 and 63% in Wave 1. If practice makes perfect, the arrow should be pointing in the other direction. Perhaps it’s a case that the all-hands-on-deck pivot to online classes when anything goes is over and students are starting to return to their pre-COVID expectations. 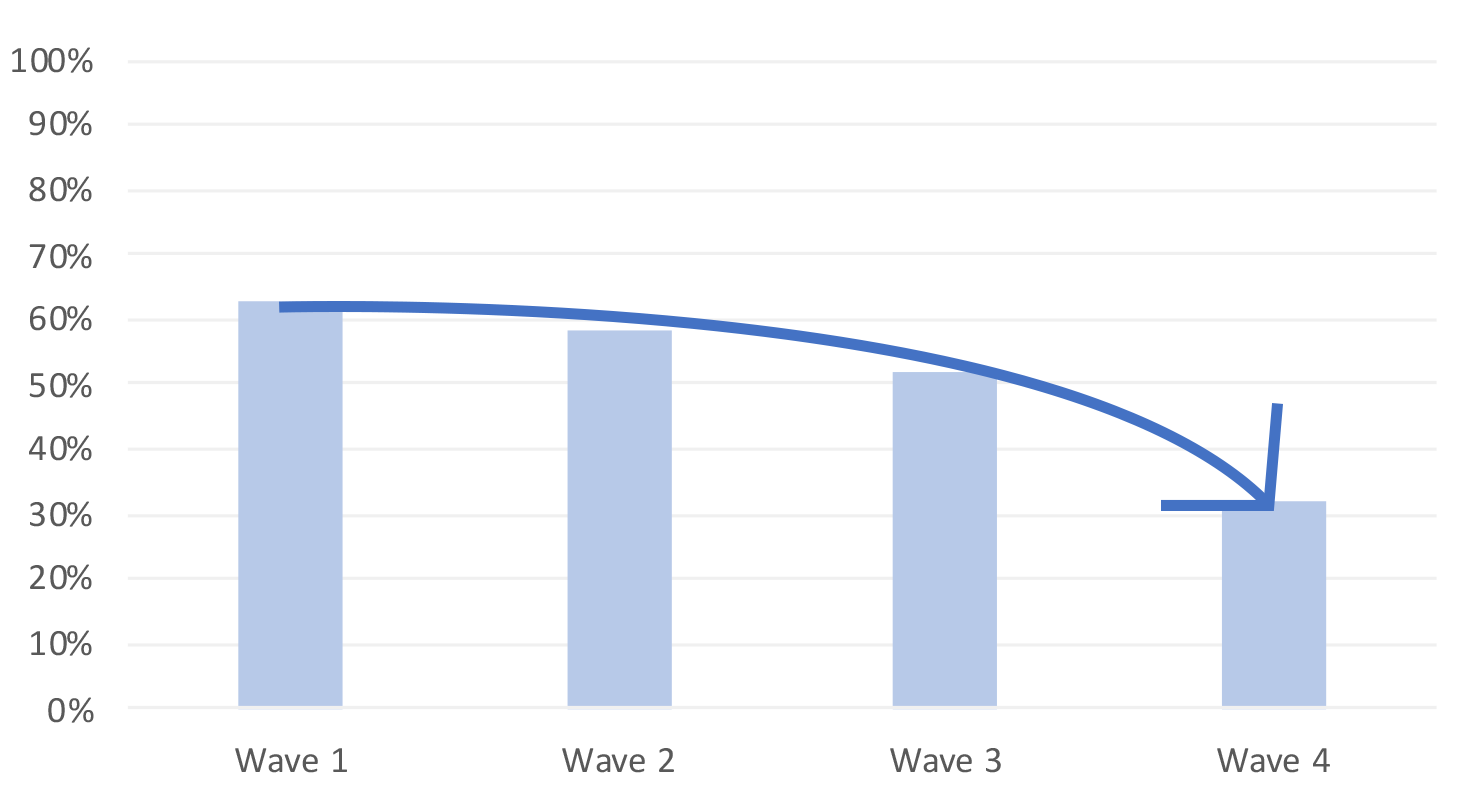 » It gets worse: only 30% of Wave 4 respondents say that the communications they received answered the important questions they had. This is way down from 50% in Wave 3 and 55% in Wave 2.

» And worse: only 47% of students felt that their school seemed genuine and conveyed concern for their welfare, a drop from the 61% rating in Wave 3 just weeks before.

Looking at this fall

» Living in close quarters with other students is becoming a lot less attractive: now 50% of Wave 4 respondents are concerned, a big jump from the 33% who were concerned in Wave 3.

» 55% of respondents say they will be living with family, 16% with friends and 9% in residence.

» When asked what support they might need this fall, students told us:

» When asked what issues they feel will make it difficult to succeed in an online learning environment, this what students told us:

» If you have found this research useful and would like more, we are offering additional reports and services designed to help you manage student recruitment and retention through these difficult and uncertain times:

The costs are surprisingly low, the rewards could be remarkably high.

We hope you have found the survey results informative.

Benchmark your own student body against the national average: info@schoolfindergroup.com